The population of Mrkonjić Grad inhabits 38 settled areas. It has been estimated that 7.915 inhabitants live in urban areas while the other number of 10.221 inhabitants belong to rural areas. 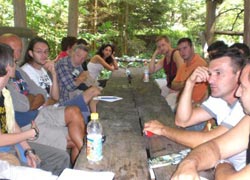 Strategic goal is to reach the number of 5300 employed residents as it used to be before tha war and at this moment there are 3545 people with jobs.