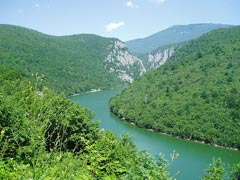 Forest area covers  about 44 % of the total land area and the forest represents a significant natural resource. Even though we can say that the forest covers a great part of the land, the forest structure is unfortunately unfavorable. 32,710 ha of The Municipality Mrkonjic Grad is forested. 79,0 % or 25,957 ha are state owned forests and they are for the most part concentrated on the areas such as Ovčara mountain, Dubička Gora ( one part of  Manjača mountain), and on the areas of Lisina and Dimitor mountains. 21 % or 6,753 ha of the forest is private owned and they are classified over the whole territory.

The territory of Mrkonjić Grad is characterized by many mine and mineral resources that are not used or exploited , with the exception of some localities such as the bauxite ore that has been further researched . When it comes to the exploitation of the mine resources it is known that the bauxite, quartz, bentonite and marble have been exploited .

When it comes to the water resources, in addition to the rivers of Vrbas, Sana and Crna rijeka there are  also some more watercourses as well as some other wellsprings on the territory of the Municipality. Watersupplying is ogranized over the waterworks in the town as well as over other local waterworks. The other quarters' supply of the water is organized due to small local waterworks from the wellsprings.

In the municipality of Mrkonjic Grad , the electricity distribution and the majority of  Electricity generation is performed by two vertically integrated territories- from the Republic of Srpska and from Federation.

According to the last census dating from 1991 there were 27.379 inhabitants on the territory of Mrkonjic Grad . During the war, the demographic picture went through some changes and therefore the number of inhabitants was significantly reduced.

Considering everything, we can say that, at this moment ,there are some 21.160 inhabitants on the territory of Mrkonjic Grad.