The municipality of Mrkonjic Grad is surrounded by numerous mountains such as: Lisina mountain(1467) on the southeast side, Dimitor mountain (1483 m) on the west side,  Čemernica mountain (1338 m) on  the east side, Manjača (1239 m), Grabež on the north side and Ovčara-Mliništa (1576m ). 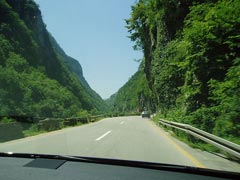 The system of both , highway and regional roads, is connected with the net of the local roads which connect  the zonal centers with the economical, natural and human resources.  The municipality of Mrkonjic Grad owns its natural resources upon which is based the economic and social development. The municipality is situated on the crossroad of highly important roadways.The roads that stretch through Mrkonjic Grad are: The  Highway M-15 (Mrkonjić Grad (Rogilji) - Glamoč - Split), the highway  М-5, the former highway of AVNOJ (Jajce - Mrkonjić Grad - Bihać), and the highway М-16 (Banja Luka - Crna Rijeka - Jajce - Split). The municipality of Mrkonjic grad is also well connected with the internetional highway Belgrade-Zagreb.